The twenty-first century is the century of the digital revolution. And a key component of this digital revolution is Web development. Every company, product creator, service provider, or marketer needs a website or an application to communicate with customers and spread the word about their business, brand, or service.

With such significance, it is essential that you know the top frameworks for web app development and how they compare to one another. JavaScript has been an integral part of web development since its inception.

And ReactJS and React Native are the top JavaScript frameworks that have taken the world by storm, initiating numerous trends, jobs, and visually appealing websites! Developers affiliated with the technological giant Facebook have developed both ReactJS & React Native.

However, many people are still unsure of the distinct differences between ReactJS and React Native. But don’t worry; as a renowned ReactJS & React Native App Development company, we are ready to assist you with this problem.

So, are you curious to know the pros and cons of ReactJS and React Native? As well as the primary difference between them. Let’s find out the answers in this blog comparing ReactJS V/s React Native.

ReactJS is an open-source front-end JavaScript library supported by Meta & a large developer community. It is a front-end library that is highly functional, fast, and feature-rich. ReactJS is primarily used to create large web applications.

The features & functionality of ReactJS have established it as one of the most used JavaScript frameworks, trusted by numerous start-ups and Fortune 500 companies. 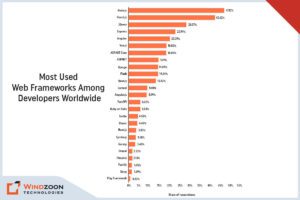 Most Used Web Frameworks Among Developers

What is React Native?

Facebook and the open-source community introduced React Native, an open-source framework, on March 26, 2015. The primary component of the framework is JavaScript. It comes in particularly handy when building cross-platform applications with interactive user interfaces. React Native was designed with the philosophy of “learn once, use anywhere” in mind.

React Native combines the advantages of native development with the well-known JavaScript library React. Due to its ability to create native apps and offer a fantastic user experience, React Native has been widely embraced by businesses and developers since it was first released. 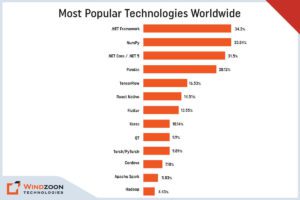 The following are some core concepts for both React and React Native. Please take a look at it to understand what makes them different.

Both React and React Native are crucial components of app and web development. Thus, the React vs. ReactJS contest has no winners. It all depends on the specifications of your project.

However, React Native is the best option if you want a native mobile app that should function across various platforms. Because it was specifically designed for cross-platform mobile app development.

If you want to build a web application, ReactJS is the way to go. Nevertheless, keep in mind that you will also require backend technology! And for that, you can seek assistance from a reputable ReactJS App Development Company.

The debate between React and React Native has long raged, and you now understand the key differences between the two.

They are remarkably dissimilar despite their striking similarities. They are important in their specific areas of app development even though developers use them for various purposes.

Although both ReactJS and React Native have numerous drawbacks and limitations, they are the best and most recommended libraries and frameworks in their respective categories.

Therefore, rather than debating which one is superior, you should choose the framework that would best serve the objectives of your business. And If you’re looking for a web development company to help you make this decision and carry it out, join forces with us!

To avail of our services, visit windzoon.com and get a quote. 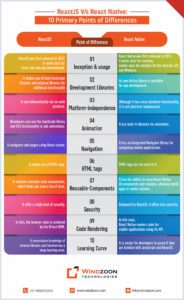