Flutter App Performance: Best Tips for How to Measure & Optimize It App performance is an essential aspect of any cutting-edge mobile application. Unfortunately, a lot of things, like skipped frames and freezes, make the app less reliable and usable. It creates a negative impression on users, eventually harming the company’s reputation.

In most cases, the performance outcomes are adequate when you build apps in Flutter. It is used by around 3.76% of total applications with more than 12 billion downloads. However, this does not mean that your flutter apps are immune to issues like performance leg.

That’s why you must pay close attention to best practices and performance enhancements for your Flutter app during its development. You can also hire Flutter App Developers to help you troubleshoot and optimize the app’s performance.

In this article, we will walk you through some of the best practices for optimizing the performance of your Flutter app.

However, before we go deep into our discussion, let’s learn about the methods to measure the performance of your flutter application.

How to Measure Flutter App Performance?

The Performance widget is one of the methods for running Flutter performance tests. The overlay widget places two graphs on top of the app.

The top ‘GPU’ graph displays raster thread performance or communication between the app’s layer tree and the device’s GPU. Although it is labeled “GPU,” the graph depicts how CPU resources are used.

The lower “UI” graph displays the UI thread, which contains the written code that the Flutter framework executes.

If a frame is displayed for more than 16.6 milliseconds (indicating that the app’s performance has dropped below 60 frames per second), the blue graph will collapse to reveal a white background and a red vertical line.

There are several ways to start the performance overlay, including:

It includes details about each frame, including what work is done during rendering from the UI thread and the raster (GPU) thread.

It monitors all events occurring within the application, including scene drawing, frame building, HTTP traffic, and other events.

It displays how much time each frame takes up on the CPU and method trace.

Now, let’s get to know about some of the key Flutter app performance issues.

Here are some of the most common performance issues with Flutter development.

With this, we have come to the most important aspect of our discussion and that is: 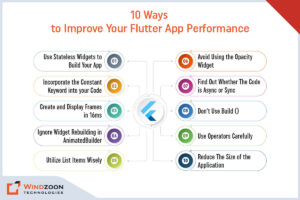 1. Use Stateless Widgets to Build Your App

What occurs when an application uses too many stateful widgets? It may extend build times, hamper app performance and raise the cost of the entire app development process. Stateless widgets are a good alternative to setState() for all the functions you want to create.

A few tips for better performance:

2. Incorporate the Constant Keyword into your Code

After breaking up the widgets in your app into smaller sub-widgets and using stateless widgets whenever possible, it’s time to optimize the resulting widgets. One way to accomplish this is to reduce the memory usage of my app’s widgets.

You can accomplish this by using the constant keyword wherever it is applicable. It can be an effective way to lower memory usage, which could affect rendering. As a result, your app will run more effectively. At the same time, you can avoid the time- and memory-intensive widget-rebuilding process.

3. Create and Display Frames in 16ms

If you observe that the app skips frames, check which frames require more than 16 milliseconds to build and render. As there are separate threads for building and rendering, you should aim for each frame to be built in 8ms or less and rendered in 8ms or less to achieve a total of 16ms or less.

If frames are rendered in less than 16ms, it will not make a significant visual difference for users, but it may improve battery life and cause the device to heat up less.

Animation is one of the most appealing features of any web or mobile application. Although it draws the user’s attention, it also decreases the application’s performance.

During app development, developers typically use AnimationController. But, it rebuilds a number of widgets in AnimatedBuilder, and this is the usual cause of Flutter’s poor performance.

To avoid poor performance, use CounterWidget, which allows you to create animation without having to rebuild multiple widgets.

You might add several list items when creating the interface or business layer for your Flutter application. Due to the method used to load them, these items may take a while to render.

It can get a little tangled, especially when dealing with long and complex lists. The reason for this is that each item in the list is gradually rendered into the system and viewed from there.

Use the ListView() function to optimize the performance and shorten the rendering time. It can speed up list loading and enhance rendering. It might be beneficial for you to stay away from widgets like SingleChildScrollView() and Column().

Many developers use the Opacity Widget when creating business applications. The primary purpose of this is to conceal another widget. While wrapping it in opacity widgets is common in programming languages such as Objective-C, it may cause performance issues in Flutter app development.

As an alternative, you can rebuild the widget in a way that also reconstructs the text widget to conceal the widget. If you want it to be visible on the screen, you can use the visibility widget.

7. Find Out Whether The Code is Async or Sync

Before you begin compiling the code, you should decide whether you want it to run asynchronously or synchronously.

It’s important to keep in mind that debugging async codes can be challenging, which can delay testing and launch times. However, incorporating this into your code can enhance both readability and performance. Over time, it might affect how well the application performs.

You should therefore locate the places where you intend to use async codes and incorporate them quickly.

When you use the Build() method in your code to create interface elements or widgets, you may consume a lot of memory. It can be costly because it consumes CPU power as well.

If you use the Build method in your code repeatedly, it will have an impact on overall performance and slow down your app. Instead of utilizing this technique to create a large application, divide your code into numerous small iterations. In this manner, you can easily render the method without having to use it everywhere.

Operators are language-specific and, when used properly, can improve the performance of your application. To save time when developing the Flutter application, use the null-check and nullable operators. It can also aid in the development of a robust solution and improve code readability. Furthermore, it also aids in error logging and effective solution coding.

10. Reduce The Size of the Application

We considered having solid code, plugins, and numerous features when creating the app to ensure that users would have a positive experience. However, we forget one thing: storing all of this data takes a lot of memory, which reduces performance.

Gradle, one of Flutter’s internal tools, aids in minimizing the size of applications. You can optimize flutter performance by reducing the size of the flutter application. Google has introduced a packaging system, which allows you to assemble collections of Android apps. The best thing about the app bundle is that you can download the original code directly from the Play Store.

Flutter is Google’s framework for developing high-performance mobile apps. It is intended to shorten the development process and enhance app performance. However, if you don’t spend the time optimizing your Flutter app for Performance, your users will receive a poorer-than-expected experience.

The best way to avoid this is to keep the advice we’ve given in mind as you create your next Flutter project. By doing so, you’ll be well on your way to giving your customers a quick, easy user experience.

You can even seek help from a reliable Flutter App Development Company if you’re still unsure how to optimize your Flutter application.

The Flutter developers at Windzoon are experts at creating high-quality, well-coded cross-platform apps. To reap the benefits of our top-notch cross-platform app development services and to receive a quote, visit windzoon.com.