Why Laravel Framework is Perfect for Developing Secure Web Applications? Backend technology plays a crucial role in mobile app development. Having reliable and trustworthy technology to handle data and back-end operations is critical for the App’s success.

Currently, the market offers a variety of backend development technologies. However, only a few of them are considered capable of developing web applications. And Laravel is undoubtedly one of those few powerful backend technologies. With nearly 71549 stars, it is also one of the most popular repositories on GitHub.

The Laravel framework can serve as a fantastic starting point for the creation of any kind of web application. That is why, each year, a large number of businesses collaborate with Laravel Development Service providers to create cutting-edge applications.

So, what is the reason for this framework’s enormous popularity, and how does it cover everything your web application requires? You will find all the answers in this blog, so keep reading.

Our first topic of discussion is to learn about the key features of Laravel.

What are the Significant Features of Laravel?

The Laravel framework is extremely well-liked by developers all over the world because of its features. Its robust and extensive features make coding the backend process easier. Here, we’ve listed a few of Laravel’s intriguing features that you can quickly take advantage of by working with a Laravel development company.

Features of Laravel Consists Of:

With this, we have arrived at the main point of our discussion.

11 Reasons that Make Laravel The Best for Web App Development 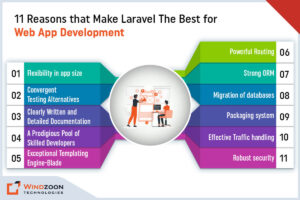 Reasons that Make Laravel The Best for Web App Development

Laravel has a lot to offer in terms of developing applications. The following are a few reasons for choosing this framework for the development of your web application:

Technology changes all the time, and anyone who has ever done online business is well aware of this fact. So it makes sense to design a scalable app that can meet the demands of a growing user base. And with Laravel, you can certainly get this type of web app.

One of the significant benefits of using Laravel for web app development is its exceptional testing support. You cannot ensure that a web app is bug-free and meets the initial requirements unless it is thoroughly tested.

The Laravel framework provides automation testing to ensure that your web app works properly. It enables developers to evaluate every module or element of the application. So they can make sure the integrated application works properly once all the modules have been combined. It will accelerate unit testing and debugging while decreasing development time and costs.

Laravel developers are very effective at learning as much as they can about the framework before starting any project. And Laravel has some of the best-written documentation among its competitors.

The Laravel community provides excellent documentation & tutorials to have a better understanding of the Laravel framework & its usage. It helps developers during the web app development process and makes the process more effective and efficient.

You should consider the developer base before selecting any backend framework for development. This is beneficial when you are recruiting new developers to work on web apps.

Furthermore, rather than focusing on cost-cutting, the emphasis should be on quality and skills. Laravel has everything. It has a sizable pool of gifted developers who are highly qualified and knowledgeable.

Hence, you won’t face any difficulty in hiring a Laravel developer or Laravel Development Company for your project.

Laravel uses the Blade Templates engine, which is simple, lightweight, and incredibly powerful when compared to other PHP templating engines. It enables developers to build lightweight class-based components using built-in templates that can be reused throughout a PHP application.

The main goal in doing this is to utilize dynamic content seeding to produce amazing layouts. It improves the speed and flexibility of web app development.

Every time a server receives a request, a specific action is launched to deal with it. We refer to this procedure as routing. In Laravel, routing is particularly powerful.

Furthermore, Laravel’s routing code is very intuitive. Compared to the code used in other frameworks, it is clear and straightforward.

The app/http/routes.php file categorizes the Laravel routes that the framework automatically loads. Laravel routes accept a URL and a Closure, making it possible to define routes in a very simple manner.

After a URL is acknowledged by the route-defining method, all that is left for the user to do is embed the topic’s name, and the appropriate URL will then be added automatically. It significantly enhances app usability and user experience.

The Eloquent ORM is a key component of Laravel. It improves the development process by using an object-oriented approach. The developer saves a significant amount of time by not having to write plain SQL queries for the program.

Additionally, ORM offers users the ability to specify the relationship right within the model class. It works well with SQL, MySQL, SQLite, and Postgres databases.

One of the most difficult tasks for developers during the app development process is synchronizing databases between various machines.

Laravel helps to solve this problem by allowing team developers to share the database. This method of development saves time. Due to this ability, Laravel differs from other similar frameworks.

A Laravel packaging system deals with various libraries or support programs that allow the web app to automate the procedure. It makes use of the composer as a dependency manager to keep track of all the information needed to manage packages.

Packages are the simplest way to speed up the process and add new features to an app. Furthermore, Laravel debugs bar and IDE helper are two of the best Laravel packages.

As a result, traffic management is carried out in the most efficient manner and the server maintains health even during periods of high traffic.

Another significant reason why Laravel is regarded as an ideal framework for web application development. Laravel is well-known among developers and companies for its security. Its ability to block malware protects the app’s data from any threats or hacking attempts.

No matter how simple or complex the app, it needs a high level of security, so creating web applications with Laravel would make the apps resistant to online attacks.

Now. Let’s move toward our next topic.

Laravel facilitates software development by allowing for the integration of various modules, plugins, components, and packages.

It includes the best Laravel packages that can significantly improve the performance and user experience of your application.

12. Other Top Laravel Packages and Tools

After this, we will see examples of famous web applications built with Laravel.

Finally, it appears clear why Laravel is the best web application development framework. As it is currently the best option for companies looking to release creative, scalable, and industry-ready web apps.

If you are interested in using this framework for your web app development project, contact the best Laravel Development company as your remote development partner.

At Windzoon, we have a team of seasoned Laravel developers who are adept at developing web applications regardless of their type and complexity. Hire Laravel Developers from us to add skilled developers to your current team for producing top-notch web solutions with the utmost precision.

Contact us today at windzoon.com to take advantage of our top-notch services and get a quote.