Who would have predicted two decades ago that we would be able to manage most of our daily activities with just a palm-sized smartphone? Most likely not. But it turns out true. Our lives have become incredibly easy and convenient thanks to various smartphone apps and the internet.

However, this growing reliance on applications has considerably expanded the market for app development. While there are many frameworks and libraries available for creating mobile apps. You need a framework that will enable you to deploy fresh concepts and keep up with the competitors in this rapidly shifting ecosystem.

However, before we get to know about these frameworks, let’s learn some basic information about the mobile framework.

What Exactly Is a Mobile Development Framework?

Mobile app development frameworks are software libraries or sets meant to aid in the creation of mobile apps for certain contexts. You can think of them as the skeletons supporting the various connecting components of mobile development.

Frameworks for mobile development are crucial because they enable developers to avoid starting from scratch, which speeds up project development. Additionally, frameworks lessen the need for complicated programming languages.

Frameworks for developing mobile applications include React Native, Swiftic, Java, HTML, and many others. These frameworks are divided into three categories: Native, Web, and Hybrid. Each sort of mobile app framework has specific uses and situations in which it excels.

Frameworks for creating mobile applications can be divided into three categories:

These frameworks are used to create native mobile applications for particular platforms. Typically, they are created to meet the requirements of a particular operating system (OS), such as Windows, iOS, or Android.

Cross-platform mobile apps can be created using several frameworks that are specifically designed for developing hybrid apps. It is equipped with both native and web development framework capabilities.

Now, Let’s learn about the top mobile app development framework to use in 2023

8 Top-Notch Mobile App Development Frameworks to Use in 2023 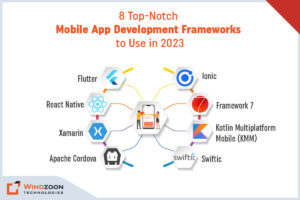 Flutter is Google’s UI toolkit that enables the creation of aesthetically pleasing, native-like applications for various operating systems and devices using a single codebase. This open-source mobile app SDK makes use of widgets to create responsive mobile applications. Additionally, it has the 2D graphics engine Skia, which enables developers to generate a fully native feel as the client requested.

In 2018, Facebook released React Native, a JavaScript-based app development framework. This framework is in high demand among app developers worldwide, with around 42% of mobile app programmers using it on a regular basis. The platform’s popularity can be attributed to the fact that it enables developers to build mobile apps with a native appearance and feel for both iOS and Android devices. However, to get the most out of this framework it is advisable to take help from a competent react native app development company to build an application.

Microsoft’s Xamaerin is a cross-platform, open-source mobile application framework. This framework enables the creation of world-class mobile applications using programming languages like C# and Net. A large community that supports the framework works with the developers to develop environments with diverse components, APIs, backends, and other features by using various tools, programming languages, and libraries.

Apache Cordova, formerly known as PhoneGap, is a well-known technology platform that developers use to create mobile apps. It is an open-source framework for creating apps that makes use of HTML5, CSS3, and JavaScript. This framework basically serves as a container that successfully aligns online applications with native mobile functionality.

Ionic is another app framework that has garnered popularity among the developer community. It is an open-source, AngularJS-based platform that enables the development of powerful web, native, and hybrid apps using CSS, JavaScript, and HTML. Ionic apps can be successfully published across different app stores and deployed on all available devices using Cordova or Capacitor.

Framework7 is one of the popular open-source frameworks that are simple to learn and utilize. It enables you to create web, desktop, and mobile applications with a native appearance and feel. Additionally, it is a crucial prototyping tool for displaying functional app prototypes as quickly as possible. Framework7 has a fantastic collection of pre-built UI components and widgets, including dialogue boxes, pop-up windows, action sheets, list views, tabs, side panels, layout grids, and many more.

It is an SDK that makes it simple to create cross-platform mobile apps. With this cross-platform technology, which is based on a single code base, you can create high-end apps that are prepared to run on both iOS and Android devices. This implies that you only need to develop platform-specific code for specific use situations, such as the implementation of a native UI.

Swiftic was created as a user-friendly framework for mobile app development. And it doesn’t need any special code to use its key functions. In fact, Swiftic allows novice developers to create iOS apps quickly and easily without having to write a lot of code. Swiftic can even compete with the top and finest framework for developing mobile apps on this list when it comes to the user interface.

Among all of the choices available on the market, picking the best mobile app development framework is a crucial step. However, you can simplify it by being aware of your final objectives and what you hope to achieve with your selection. We anticipate that after reading this post, you’ll be better able to decide which mobile app development framework is appropriate for your endeavor.

If you select an appropriate mobile development framework, your business can succeed. However, if you are unsure of which framework will work best for your company, you can enlist the help of a specialist to verify your hypothesis.

Windzoon is a fantastic option if you’re looking for a specialist to assist you with your app development project. Hire mobile app developers and designers from us who have over ten years of expertise delivering a wide range of app development and design services.

Visit windzoon.com to request a quote or to discover more about us.

Soham Trivedi is a co-founder of Windzoon Technologies and has been working as a business development manager for more than 10+ years. He is mastered in business management but his passion for writing has driven him toward the content writing field. Apart from being a business development manager, Soham Trivedi is a successful content writer and a technology lover and has been writing across various disciplines.