Know 10 Best Web Development Frameworks to Use in 2023 A decade ago, if someone had told us that applications would govern our lives, we probably would have laughed it off. But it did in fact become a startling reality of the world we live in today.

Most of our everyday activities are managed by apps, from alarm clocks to fitness trackers and reminders, from food and grocery delivery services to banks and work management systems.

These frameworks make it possible to build various web applications that work on a variety of platforms. Additionally, their code can be used to create mobile and progressive web applications. And as a developer, marketer, or business owner, you might want to take advantage of using a web app development framework for your app-building project. Correct?

This blog post has covered several excellent frameworks that may be used to create best-in-class web apps.

However, before we go any further, let’s get some basic understanding of web development frameworks.

What Is a Framework For Web Application Development?

A framework is a bundle of programming tools that acts as a basic “roadmap” for developing well-structured, reliable software and systems. A web development framework is created to assist in the creation of web applications, including web services, web resources, and web APIs.

A web framework gives access to pre-made components, code snippets, or templates that are used to speed up the creation of web apps through a library.

There are various web development frameworks to select from. But they all have these three benefits in common:

Web development frameworks “bootstrap” the development process by offering templates to jumpstart a project or code for aspects that are common to many projects.

Web app development frameworks are supported by developer communities that regularly provide updates to guarantee that components are consistent with web standards, secure, and stable.

Frameworks aid in creating a structure for web application development that is both scalable and optimized for performance—aspects that also make these applications simpler to debug and manage.

Backend (Server-side): The backend framework is responsible for the application’s internal, background operations.

Frontend (Client-side): Frontend, which refers to the exterior component of a web application framework, is the view of the application that the user sees when they access it.

Now, we will move towards to know some famous web app development frameworks to use in 2023. 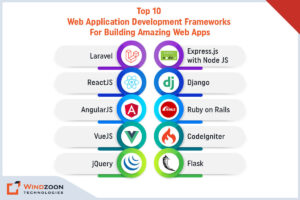 The Laravel framework is a popular open-source backend framework that uses PHP for scripting. It was developed by Taylor Otwell in 2011. The MVC architecture enables quicker development and simpler maintenance. With built-in API support, Laravel has a sizable number of packages.

Web developers utilize it to make web development work easier. It has the power to simplify real-time event broadcasting and develop a comprehensive background and task processing. Therefore, Laravel is the perfect for developing secure and large-scale web applications.

In 2013, Facebook launched React JS, an open-source JavaScript library. React is a web framework that is mostly used to create single-page front-end apps. In addition, it allows for the creation of mobile applications, something the majority of other frameworks often do not allow for.

React seamlessly connects with a variety of different libraries to successfully carry out routing, state management, and API interface tasks. That’s why many developers using ReactJS for their next web application project.

Google and a group of developers created the web framework known as AngularJS in 2009-10, which is based on JavaScript. This web development framework got famous because it makes front-end development extremely simple and quick. One of its most important aspects is code reuse.

Another state-of-the-art open-source JavaScript-based front-end framework was created by Evan You in 2014 and is maintained by him and the rest of the active core team members. It is well-known for its usage of Glorifying UI and the rapid building of single-page applications. It takes advantage of the best features of the React.js and Angular.js frameworks.

VueJS’s adaptable design framework & growing popularity is a reason that have piqued the interest of a number of small and large enterprises.

jQuery is an open-source front-end JavaScript library built by John Resig in 2006. It is used to create app user interfaces. JQuery is renowned for its straightforward methodology and cross-browser interoperability. The framework makes it easier for DOM elements and its syntactic structure to interact.

The framework is well-known for its capacity to produce outstanding effects and animations in the developed apps. jQuery is a lightweight framework with a variety of plugins that make it simple to include new features.

The pairing of Node JS and Express.js results in an open-source front-end & a back-end framework for web development. TJ Holowaychuk, StrongLoop, and others developed the ExpressJS framework, while Rayn Dahl developed NodeJS in 2009-10. They are the greatest JavaScript web development frameworks for creating web applications and writing server code.

These frameworks are highly regarded by full-stack developers and allow you to create fully functional web apps with ease. ExpressJS and NodeJS work together to construct real-time streaming, payment gateways, eCommerce, and on-demand solutions.

Applications built with the combination of ExpressJS & NodeJS Framework

Django is an open-source, Python-based back-end web development framework used for the quick creation of APIs and the spick-and-span layout of web applications. It was developed by the Django Software Foundation in 2005. Django growing in popularity among organisations and developers because web apps produced with Django are quick, safe, and scalable. Django offers its consumers a great level of scalability.

Django is one of the most organised frameworks. However, Django is better suited for web applications that are adept at managing backends. Django is a good option when there are too many visitors or transactions occurring. Django can be used to develop inventory management systems, CRM systems, and social networking sites. It is pretty popular in the computer and electronics industries.

Ruby on Rails is an open-source back-end framework developed by David Heinemeier Hansson in 2004. It is based on the Ruby programming language. Ruby runs on Linux and is built on the model-view-controller (MVC) architecture. Ruby on Rails is secure and scalable, and it takes advantage of massive third-party libraries to accelerate development.

Choose the Rails framework if you want your web developers to build your app by automating repetitive and simple operations. Ruby on Rails is used to create a Minimum Viable Product (MVP) for startups. And is great for database-backed web applications.

Codelgniter was developed by Rick Ellis in 2006 and it supports both front-end & back-end web development. It is a lightweight PHP framework with one of the smallest footprints, which saves time by requiring less coding. Because CodeIgniter has many built-in capabilities and few external dependencies, developers value its quickness. MVC architecture is also used by CodeIgniter.

Flask is another popular open-source Python-based back-end framework developed by Armin Ronacher in 2010. It is well-known for its flexibility and as a lightweight “micro-framework” with little or no dependencies on third-party applications. It does, however, offer extensions that can provide your web app with essential extra features, such as form validation, upload handling, and authentication. If you want to create basic web applications that utilize NoSQL databases, you should pick Flask.

The world of web development has advanced rapidly, and knowing only HTML, CSS, and JavaScript is no longer sufficient.

You need to keep up to date on the newest development frameworks and technologies if you want to stay afloat. Depending on your preferred programming language, you can initially choose one framework from the front end and one from the back end. You might even enlist the assistance of a capable Web app development services provider for your project.

If you’re looking for a specialist to help you with your web app development project, Windzoon is a great choice. Hire web app developers from our company that have more than ten years of experience providing a wide range of app development services to our diverse business clients.

For more information about us or to obtain a quote, go visit windzoon.com.